EnergyCoin is back on CoinMarketCap!

As you may all know, due to a low volume in October, ENRG was delisted from Bittrex exchange, which caused setting it as an inactive coin on CMC. Now that we have secured the liquidity of the coin, and have active ENRG markets, we are back on CMC as an active coin! You can see all the information about EnergyCoin on CoinMarketCap. Keep trading guys!

Thanks to the progress we’ve made alongside our community of both supporters and traders: we’re finally back on CoinMarketCap! Now, let’s strive to progress even further and move ENRG towards the the very first pages on CMC. We can do it!

In case you feel risky about trading ENRG on the current bear market and decide to keep your stash for the better days; do not hesitate to use our web and desktop wallet.

Stay tuned for the further updates, peeps! We’re planning to release new details regarding Phase Two of the EnergyCoin Dashboard Application next week.

Thanks for sticking by!

This update was also published at Medium

As our team planned that there will be another exchange where EnergyCoin is going to be listed, there is one from today! Bitibu is new marketplace where ENRG can be deposited and traded; they opened two new market pairs: BTC — ENRG and BTB — ENRG. Make sure to create an account here, deposit your funds and start trading!

Let’s not forget with new marketplace all the active marketplaces where ENRG can be traded, which are Crex24 and Nova Exchange. Now is ENRG listed on three exchanges, and with that we secured liquidity of the coin and it won’t be untradable ever again. We expect soon to be back on CoinMarketCap as an active coin since there are two active BTC — ENRG markets and third is being added now.

It has been 10 days since EnergyCoin was listed on crex24, and thus far we are satisfied with crex24 services and support, providing 24/7 working platform with clear interface that is simplified enough for the beginners, yet with advanced tools that can be used by the experienced traders. Their fees are pretty fair as well, maker rebate is 0.01% and taker fee is 0.10%. Big thanks to crex24, keep trading guys!

ENRG is listed on NovaExchange, it can be deposited and traded there if you have an account already. Soon enough, as they’ve said, we will know when are they going to re-open NovaExchange and everyone is going to able to register again. “In 10–12 days we will announce the date for re-opening.” was part of their article from 8th November. So we expect their announcement about re-opening not later than 20th November. We will keep you guys updated! 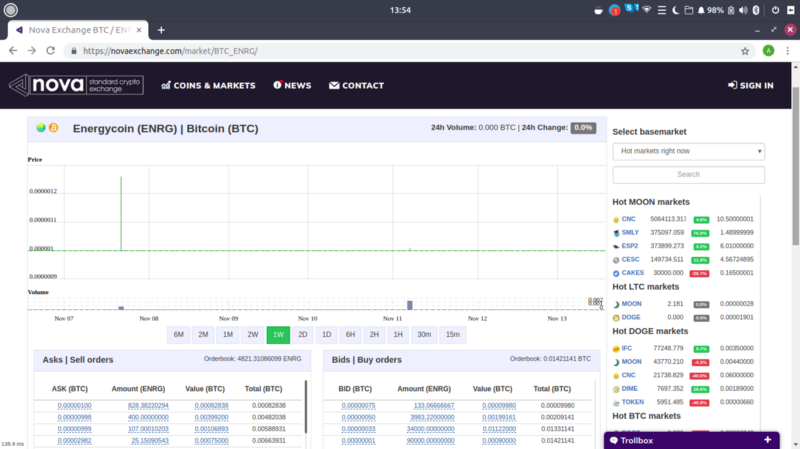 In upcoming updates you will get more information about new partnerships, sponsorships and app. Stay tuned!

ENRG has been listed on Crex24!

We are very happy to announce that we are officially listed. Today we have received a message from the Crex24 team that they have opened ENRG-BTC market. From now on you can make ENRG deposits to your Crex24 account and trade ENRG. 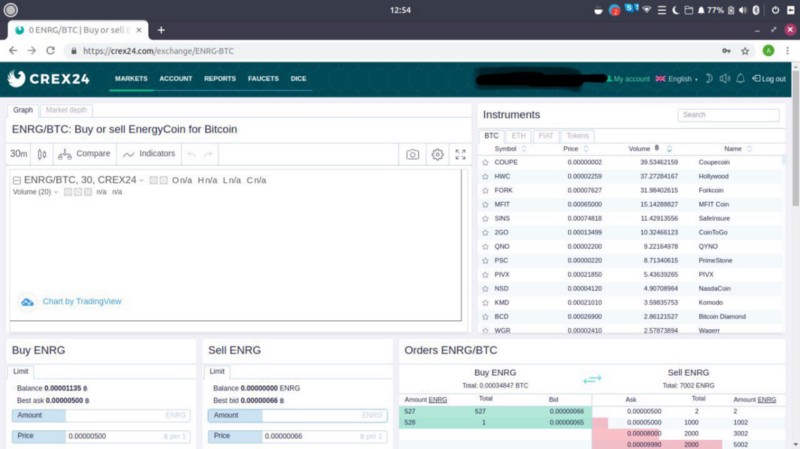 Now that we are listed on a new exchange, our goal is to get listed on one more. We are still considering what exchange would be the best option for our project. When we narrow the list of options, we will let you know where else ENRG might be tradeable.

Our devs have finished the QT wallet win64 version, and we are going to test it for a some time now, to see if there are any bugs to fix.